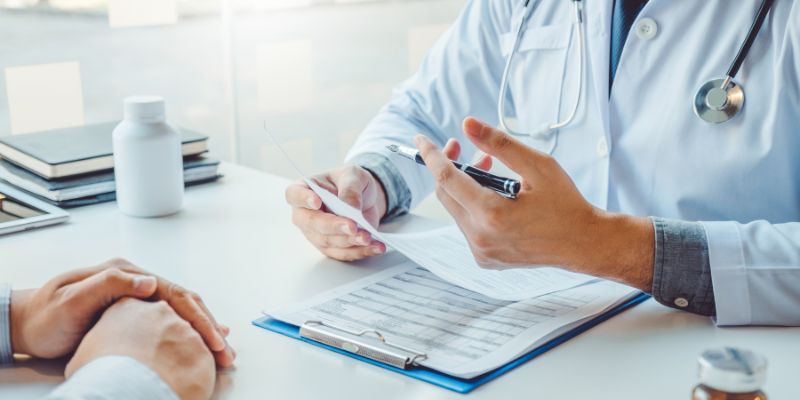 One in five GPs could be unwilling to prescribe aspirin to patients with a cancer-causing syndrome, despite national guidelines advising it, new research has found.

The study, carried out by the University of Leeds and funded by Cancer Research UK, aimed to identify which types of information would influence GPs to prescribe aspirin for patients with Lynch syndrome – an inherited condition that increases the risk of developing several cancers including bowel cancer.

In the study, 672 GPs in England and Wales read scenarios where a patient with Lynch syndrome had been advised to take aspirin for bowel cancer prevention by a clinical geneticist – a specialist who manages patients and families with or at risk of a genetic condition.

The GPs then filled in a survey indicating if they were willing to prescribe aspirin based on the scenario, with one in five respondents saying they were unwilling. Those GPs were concerned about side effects of long-term aspirin use, and the fact that this use of the drug isn’t listed on labels by aspirin manufacturers.

We want to see more training made available to ensure all GPs are aware of the guidance and can help their patients benefit from it.

Previous research, known as the CAPP2 study, found that people with Lynch syndrome could reduce their risk of developing bowel cancer by taking aspirin daily for at least two years. The National Institute for Health and Care Excellence (NICE) recently adopted these findings into clinical guidance for preventing bowel cancer in a Lynch syndrome population.

But despite these changes in guidance, patients still face barriers when seeking an aspirin prescription from their GP. Less than half of the GPs in the study were aware of this use of aspirin before taking part in the survey, and just over 17% of the GPs were aware of the NICE guidance.

Kelly Lloyd, Postgraduate Researcher in the Leeds Institute of Health Sciences and lead author, said: “We want all GPs to have effective conversations with their patients who have Lynch syndrome about the benefits and harms of taking aspirin.

“Nearly one in four GPs don’t feel fully equipped to have conversations with their patients about aspirin, which is why we want to see more training made available to ensure all GPs are aware of the guidance and can help their patients benefit from it.”

The GPs were provided with different amounts of information about prescribing aspirin for bowel cancer prevention in Lynch syndrome, covering NICE guidance, previous research and comparisons of aspirin’s benefits and harms.

The results showed that GPs’ decisions to prescribe were not altered by the distinct types of information they received.

Nine in ten of the unwilling GPs were concerned about the harms of aspirin, which can cause ulcers in the stomach or gut, especially if taken for a long time and in large doses.

Four in five were concerned about prescribing ‘off-label’, as manufacturers have not yet registered this use of aspirin. Drug companies have to undertake clinical trials to license medication for additional uses, but the process is expensive and can take years. As a result, prescribing aspirin for off-label use carries a heavier responsibility for medical practitioners than fully licensed medication.

Sarah Sims and her brother, Shaun, at Sarah’s wedding

Sarah Sims from Welwyn Garden City found out that she had Lynch syndrome in 2021 after her younger brother Shaun contracted bowel cancer.  Sarah, who takes aspirin daily, said: “I am grateful that this simple medicine could make a difference to my chances of developing further cancers.

“I used to buy it over the counter, but I have aspirin on prescription now. I had to explain in some detail about the benefits and that my geneticist had recommended it in-line with the CAPP2 study.”

Researchers are now calling for targeted interventions, such as formal training, educational events and features in GP magazines, to ensure the NICE guidance is followed across England and Wales.

Ms Lloyd said: “Our findings suggest one approach to supporting GPs’ discussions with patients on the benefits and harms of aspirin for preventive therapy is increasing awareness on using aspirin for this purpose through formal training, educational events, and GP magazines.

“Ultimately, we want to make sure everyone with Lynch syndrome has equal access to aspirin as a preventative treatment. We hope that these findings can help to effectively implement the NICE guidance recommending aspirin into routine clinical practice.”

Contact Mia Saunders in the University of Leeds Press Office via m.saunders@leeds.ac.uk with media enquiries.