Children born as little as three weeks premature, who consequently fall into an earlier school year are at increased risk of experiencing setbacks in their education after their first year of school.

Previous research has already shown that children born severely prematurely, more than ten weeks early, are more likely to suffer educational problems. But the new findings highlight the disadvantage children born moderate-to-late premature may face, who were thought to be at a lower risk.

New research, from the University of Leeds and Born in Bradford, looked at the complex interplay between the educational disadvantage of being born moderately premature, and when during the year a child was born, to understand whether extra support might be necessary for some children.

This was in response to conversations with schools participating in the Bradford Opportunity Area programme, a Department for Education initiative aimed at improving outcomes for children and young people in areas that face significantly higher barriers to social mobility compared to their peers in other parts of the country.

They indicated this was a specific area they would value further research into, to help inform their decision making.

Co-author Dr Liam Hill, from the University of Leeds’ School of Psychology, said: “Some children born prematurely not only have to contend with having spent less time developing in the womb but also have to start school a year earlier than they would have, had they been born on their due date. This amounts to having less time also developing outside of the womb at the point they start school.

“This can pose additional challenges right from the start of their education, and we found this can have an immediate impact on their performance, after just one year of school.” 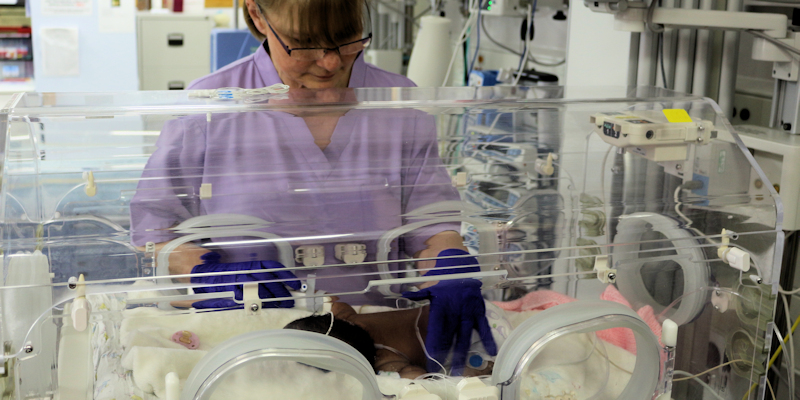 A baby in the Neonatal Unit at Bradford Royal Infirmary. Credit: Born in Bradford

The researchers looked at more than 10,000 school children from the Born in Bradford birth cohort study and found that the odds of a child not achieving a ‘Good Level of Development’ at the end of reception, if they were born prematurely, were approximately twice as high as those for children born at full term.

The researchers also analysed data that suggested that holding premature children back from starting school by a year may not compensate for being born prematurely, although they did not test that directly.

“We suggest that schools should be informed which of their pupils were born prematurely so they can be given extra support, particularly early on in their schooling.”

Their research was published in the journal Archives of Disease in Childhood.

Co-author Dr Katherine Pettinger, a neonatal doctor from Born in Bradford and the Bradford Teaching Hospitals NHS Foundation Trust, said: “Whilst it seems like an obvious solution, delayed entry for premature children is not likely to compensate for being born early, as we found that within a given school year, the risks to development faced by children born premature did not vary depending on when within that school year they were born.

“To try to better support this at risk group we instead suggest that schools should be informed which of their pupils were born prematurely so they can be given extra support, particularly early on in their schooling.”

According to national guidelines, once discharged from hospital severely premature children are given follow up medical support, and it is recommended that their schools are informed of their circumstances. But for moderately premature children, born between three to eight weeks early, there is no routine follow up support offered, so schools are unlikely to be informed.

To try to tackle the problem the researchers suggest:

As well as highlighting the risk for premature children who start school earlier than expected, the findings also show evidence for differences in the development of children born prematurely at an earlier age than any previous studies.

The researchers, therefore, argue that from an early age there is a complex interplay between health and education, which should help encourage education providers to move away from arbitrary decision making, towards a more targeted, personalised approach.

“This research is a great example of how we have used the latest evidence from Born in Bradford to improve the life chances for the children of Bradford, by introducing a smarter system to share information between our health and education services.”

The paper, published in the journal Archives of Disease in Childhood, is titled ‘Starting School: Educational Development as a Function of Age of Entry and Prematurity’ and is available online: https://adc.bmj.com/content/early/2019/07/18/archdischild-2019-317124