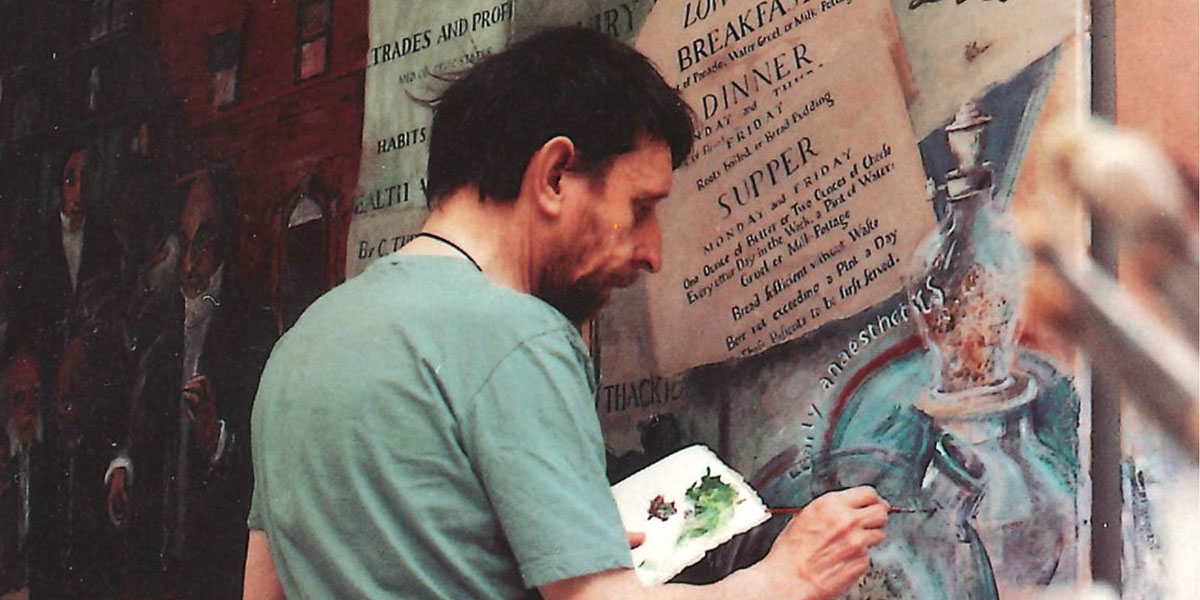 December 2019 sees the 30th anniversary of the unveiling of the Medical Shool Mural, a panoramic history of the School of Medicine, founded in 1831, painted by Brian Holmes.

In 1979 the School moved from the Old Medical School into its new premises on the University campus. Despite the School having celebrated its 150th anniversary in 1981, there was little in the Worsley Building that acknowledged the history and development of the institution. In 1987, following  a proposal from the Secretary of the School, Mr Bill Mathie, the idea of an illustrated history of the School through the medium of a mural, was taken up by the then Dean of Postgraduate Medicine, Mr David Wilson, himself an alumnus of the School. The proposal was supported by Faculty, an artist’s brief prepared and a competition established. From the submissions received Brian Holmes, a Leeds-based artist was selected. In addition to sponsorship from the Thackray Company and MPS, many alumni and members of staff of the School made donations to fund the mural’s creation. Brian completed the work in studio space made available to him on Level 6 of the Worsley Building, to which visitors were invited to watch progress. It was completed in one year and unveiled in 1989 in the Student Common Room on Level 7, by the Pro-Chancellor, Col Alan Roberts. The mural was moved, due to redevelopment some fifteen years later, to its present location in the Health Sciences Library on the same floor of the Worsley building.

This large (28ft x 7ft) painting, executed on four panels, illustrates the buildings, individuals and achievements of the School, set against a backdrop of the development of the city, providing a colourful and vivid picture of the School’s history. The four panels each focus on a phase of the School’s development, from its foundation in 1831 to the present site on the University campus.

Charles Turner Thackrah undertakes a dissection at his School of Anatomy, which he established in Leeds in 1826. He is observed by three local practitioners, and in the presence of two of the co-founders of the School, Dr Adam Hunter and Dr James Williamson. (The artist recording the scene bears a striking resemblance to the artist of the mural, Brian Holmes). The School of Medicine’s foundation date of 1831 is recorded and its East Parade home (1834 to 1865) illustrated, together with a selection of contemporary documents including the frontispiece of Thackrah’s publications, one of which on Occupational Health and Diseases, earned him the epithet after his death of ‘The Father of Occupational Medicine’. Early methods of anaesthesia are shown and the reputation of the Leeds surgeon William Hey I is recognised by an illustration of the William Hey Medal, awarded annually to the best student.

The Medical School building in Park Street (1865 to 1894) is shown and reference is made to Public Health Acts of the period. The building of the Leeds General Infirmary, completed in 1869, is commemorated and shown with contemporary equipment. A number of individuals associated with Leeds medicine in the 19th century are illustrated, Sir Arthur Mayo Robson (surgeon), Thomas Scattergood (obstetrician and gynaecologist, a student of the School in 1845, who became the first Faculty Dean at the time of the School’s union with the Yorkshire College in 1884), Sir Clifford Allbutt (physician and inventor of the clinical thermometer, also illustrated), and Arthur Ferguson McGill (surgeon). An avalanche of bacteria appears representing the advances made against infectious diseases during the century. 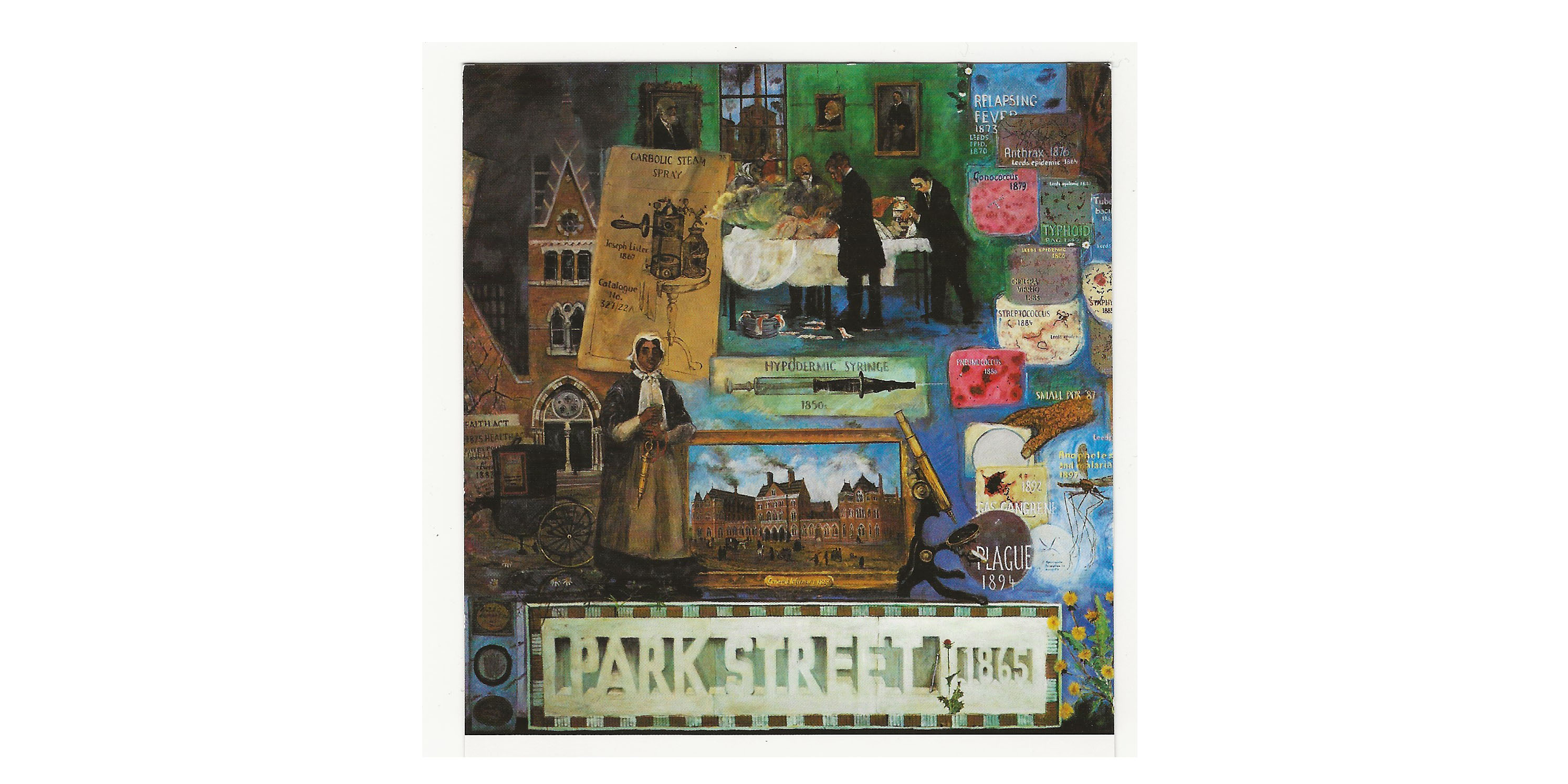 The façade of the Old Medical School in Thoresby Place, the home of the School from its opening in 1894 to 1979 is shown, together with its Library and Entrance Hall. Dr WKJ Walls, anatomist and chronicler with Dr Stephen Anning of the history of the school, published in 1982, is shown at his former office window. Early X-Ray equipment and a negative plate (which is a superb trompe d’oeil) are illustrated. The foundation of the Dental School in 1906 is recorded. In the centre is a theatre scene of the early 1920s with Lord Moynihan performing an abdominal operation. The road traffic accident and the headlines about the 1918-19 influenza epidemic indicate two contemporary problems of the early twentieth century. 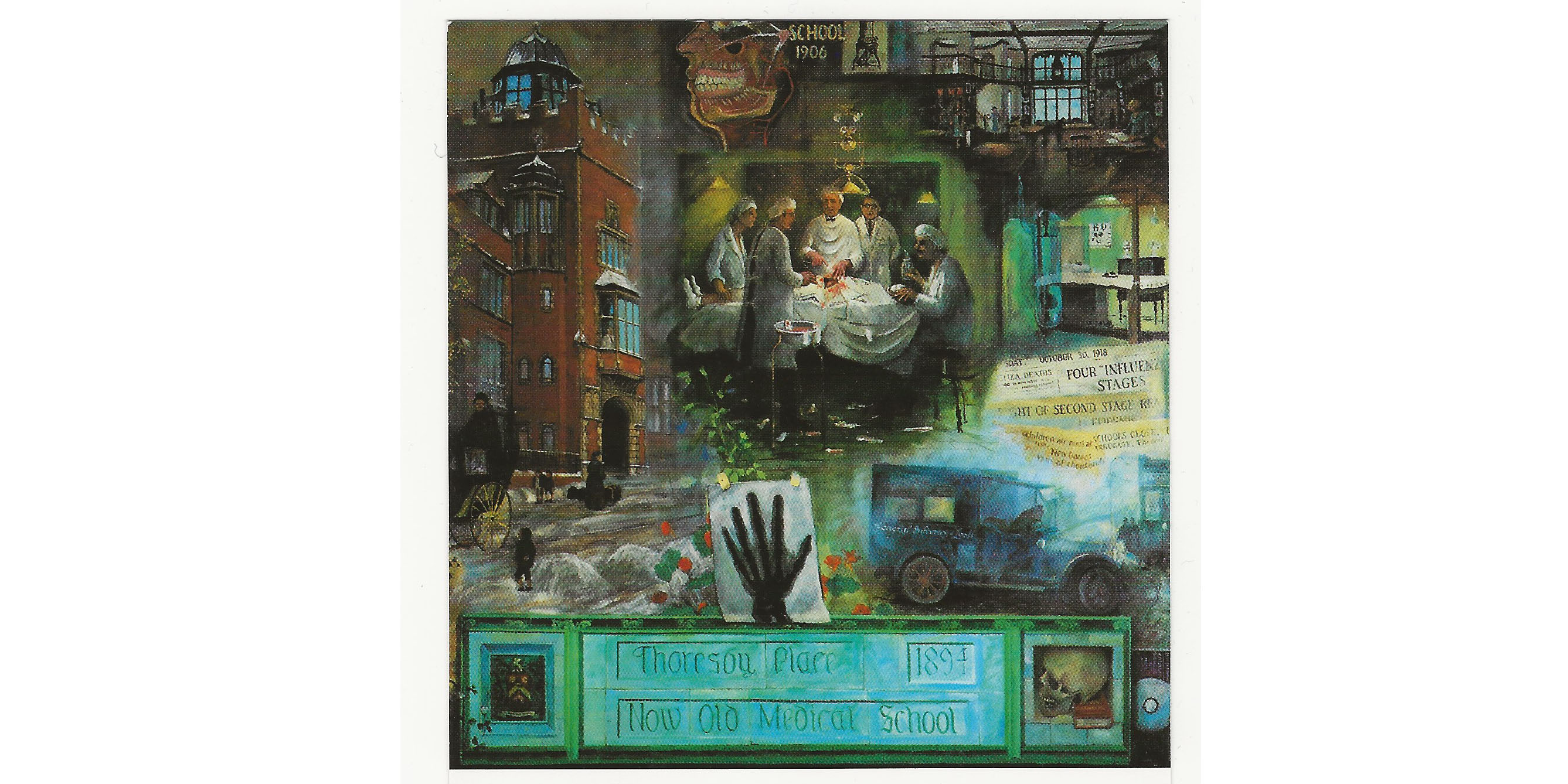 The Worsley Medical and Dental Building, opened in 1979, and its teaching facilities are shown together with medical students conducting a respiratory exercise on one of their colleagues. The Wm Tweddle Clinical Sciences Building at St James’s University Hospital is shown. The progress made during the second half of the twentieth century in electron microscopy and techniques in diagnostic imaging, with Dr John Lamb, and laboratory medicine are shown. The scene of an early (1950s) kidney dialysis machine, invented in Leeds by Dr Frank Parsons, is close to an operating theatre scene in the 1980s showing Professor Geoffrey Giles conducting a kidney transplant. Two of the sponsors of the mural, Charles F Thackray Ltd., the Leeds-based manufacturers of surgical instruments, artificial hips and other medical products, and the Medical Protection Society are represented on this panel. 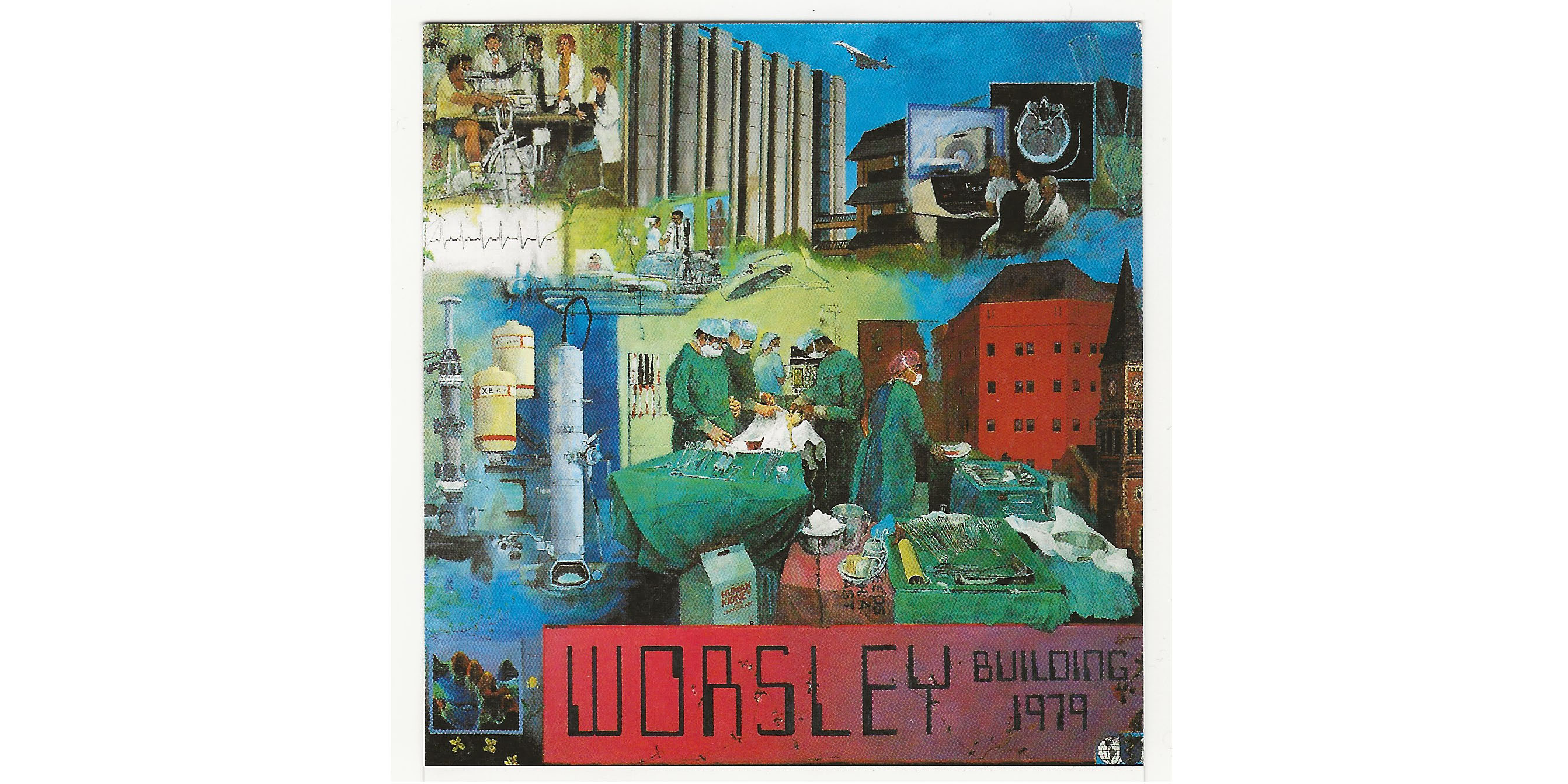 Brian Holmes was born in Ripponden, West Yorkshire in 1933, trained at Huddersfield School of Art and The Slade and became a teacher of etching and painting. He was an admirer of anatomical illustrators. Following the completion of the Medical School Mural he was commissioned in 1992 by the medical students to paint a posthumous portrait of the Professor of Surgery, Geoffrey Giles, who had died suddenly that year and that portrait was hung in the Students’ Common Room in the Clinical Sciences Building at St James’s University Hospital, Leeds. In 1998 he painted a second historical panorama. This was of the history of the Charles F. Thackray Company, for the Thackray Medical Museum, which opened in 1997. Brian Holmes died in 2009. For more on Brian Holmes, visit www.brianholmesart.co.uk 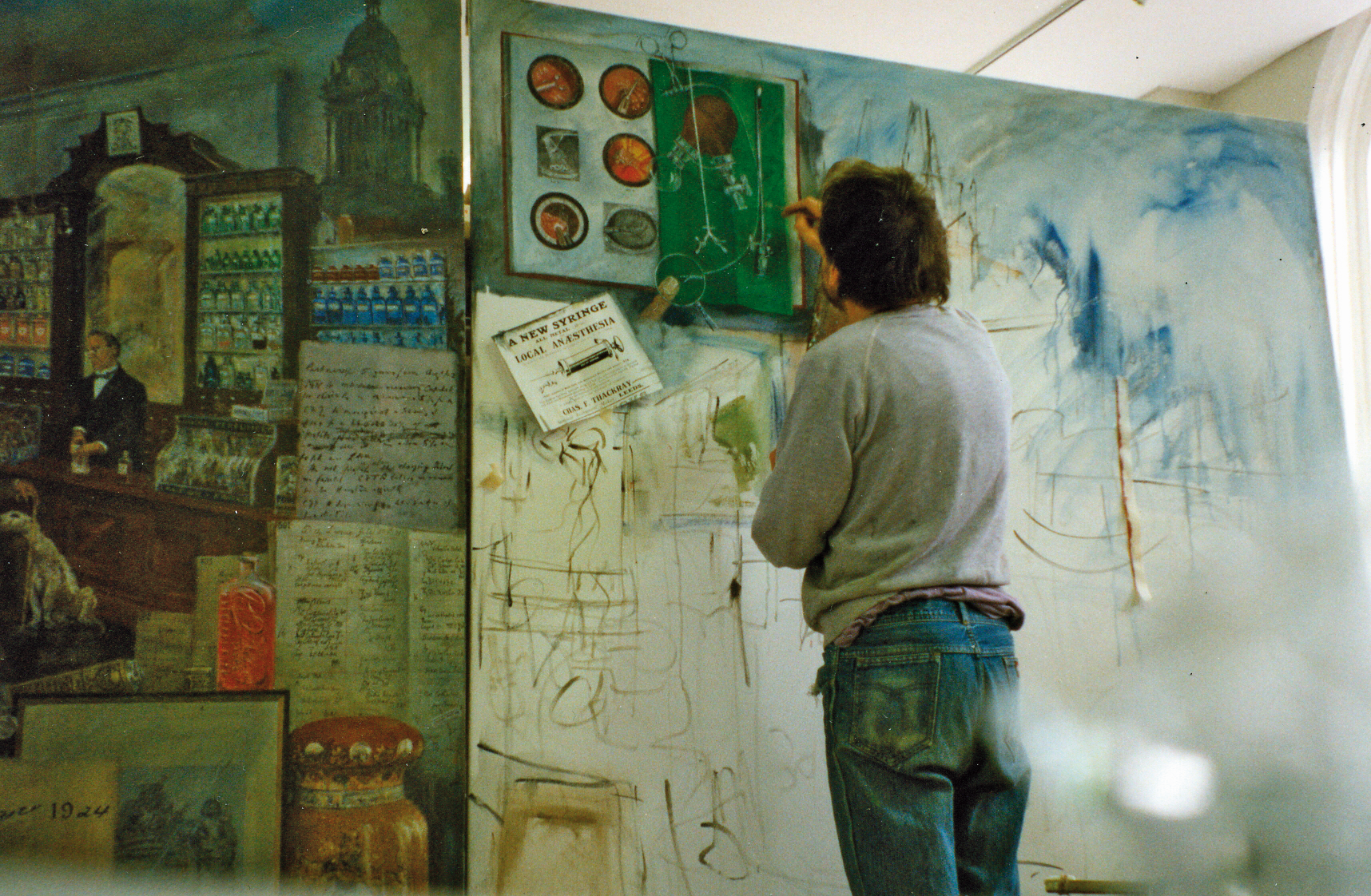 Above: Brian Holmes at work in 1998 on his commission for the Thackray Medical Museum, Leeds, a mural of similar dimensions and scope.