New tool to find and fight the deadliest lymphomas 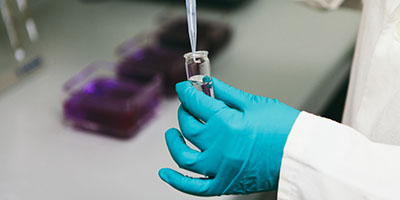 UK scientists have found a new way to identify people with the most aggressive types of lymphoma, which are less likely to respond to standard drugs.

Lymphomas are a form of cancer affecting white blood cells and although these tumours looked the same as others under the microscope, the new test – called gene expression profiling – showed that one in 10 people in a trial were half as likely to be cured with existing treatments.

Diffuse large B-cell lymphoma affects almost 5,000 people in the UK every year, and is the most common form of the disease.

Many people respond positively to existing treatment, the researchers say. But by analysing the DNA and RNA of tumour cells from almost 1,000 people with diffuse large B-cell lymphoma who took part in a clinical trial, they discovered a group for whom standard lymphoma treatment was much less effective. They say the new test finds twice as many of these people – the "molecular high grade" group – as previous methods.

The new study was led by scientists from the Universities of Leeds, Cambridge and Southampton and pooled expertise in pathology, oncology and bioinformatics to study the problem from multiple perspectives.

The researchers identified the group using complex computer models to analyse usage of every one of the 20,000 genes which make up the complete gene structure of human cells.

People with the "molecular high grade" type of lymphoma have a three-year survival rate after standard treatment of only about 37%, compared to 72% for all other cases.

Professor David Westhead, from the Faculty of Biological Sciences at the University of Leeds, is one of the senior authors of the resulting research paper, published in the Journal of Clinical Oncology today. The work was funded by the blood cancer research charity Bloodwise.

Professor Westhead said: “We have discovered which patients will be left at greater risk by only receiving standard treatment, and at nearly 10% of people, it is a significant group."

Prosessor Ming-Qing Du, from the Division of Cellular and Molecular Pathology at the University of Cambridge, another senior author of the paper, said: “By identifying the molecular high grade group we have found that the number of people who have a high chance of their lymphoma responding poorly to existing treatment is double what we expected.

“This should be a spur for pathologists to urgently re-assess the way we make the diagnosis, so that appropriate therapy can be tailored to the individual.”

The third senior author, Peter Johnson, Professor of Medical Oncology at the University of Southampton, said: "At the moment, the standard treatment for this type of lymphoma is to use the R-CHOP combination of drugs.

"For patients with molecular high grade lymphoma this may not be the best approach, and we need to make sure we identify them early on, so that we can consider different forms of treatment.

"At present we can use more intensive chemotherapy, but by understanding the biology better we hope we can test more selective treatments with targeted agents.”

Dr Alasdair Rankin, Director of Research at Bloodwise, said: “This important research is tackling the challenge of accurately identifying lymphoma patients who will and won’t respond well to standard drugs. The next step will be to develop this approach for use in the NHS, so that more lives can be saved.”

The research was undertaken as part of the Bloodwise-funded Precision Medicine in Aggressive Lymphoma programme, a collaboration between researchers at a number of UK universities that is identifying more effective lymphoma drugs for people who do not respond to current treatments.