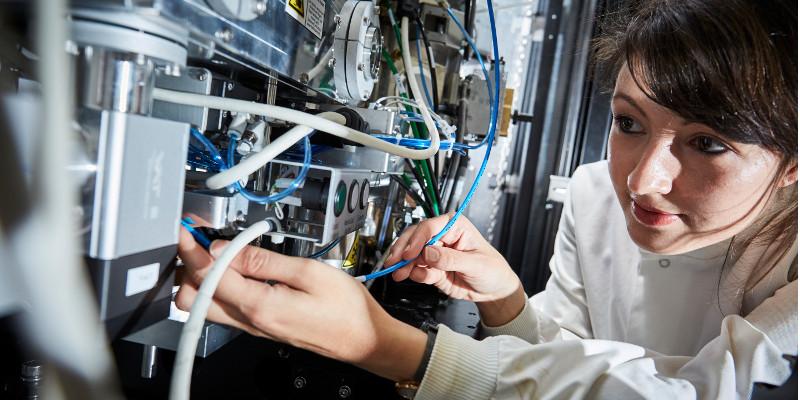 The century-long mission to understand how the proteins which underpin amyloid-based diseases like Alzheimer’s, Huntington’s and Parkinson’s has taken major steps forward in the last 12 months.

High-powered microscopes using electrons instead of light to ‘see’ the actual shape of samples put under them, at near atomic-levels of detail, have only recently become available to UK scientists.

The UK has invested heavily in the ‘game-changing’ cryo-electron microscopes, but there are still fewer than 25 of the multi-million pound instruments in UK universities and research institutes.

Technology in the north of England

They have already proved their worth as a key tool for scientists who have used them in a number of research projects, but have just delivered their biggest success yet: to reveal the structure of amyloid – a build-up of abnormal proteins in the body that causes disease.

A section of a b2m amyloid fibril, with the atomic model for eight copies of the b2m protein built into the EM density. The fibril is built from two ‘protofilaments’ that wrap around each other (blue and pink). This section is around four billionths of a metre long.

There are less than ten good quality images and structures of these kinds of proteins available to study in the world. This means the Leeds research makes a significant contribution to scientists’ understanding of how the proteins' form aggregates and how they might contribute to amyloid disease.

The Leeds study improved understanding of amyloid proteins as a whole, but was the first to provide a high quality image of the ß2microglobulin protein using cryo-electron microscopy.

The images and 3D structures of the protein aggregates – which the Leeds scientists showed formed long, twisted fibres – has been published in the journal Nature Communications.

The ß2microglobulin protein is normally involved in a healthy immune system, but can assemble into the pain-causing amyloid fibres in people who undergo long term dialysis for kidney failure. When they lodge in people’s joints they can cause osteoarthritis.

This film shows the details of how the proteins in the amyloid fibre, which are intricately folded into a flat layer, are arranged in 3D.

The publication of the new amyloid structure represents a major contribution to the field of protein science, showing two very different forms of the same protein in healthy and disease form. It is anticipated the findings will be used by drug manufacturers and research groups internationally who strive to fund cures for amyloid diseases of all types.

“Scientists have progressed from working with blurred low-resolution images to our razor sharp 3D images and structures, thanks to modern advances in cryo-electron microscopy.”

The pair were supported by colleagues at Leeds, including lead author Dr Matthew Iadanza, and Josh Boardman, who at the time was an undergraduate student in Biochemistry, and an array of talented PhD and post-doctoral researchers.

The study also involved a long-standing collaboration with Professor Bob Griffin, from the Massachusetts Institute for Technology, who specialises in another method of advanced biological analysis of biological matter - solid-state nuclear magnetic resonance.

Together, their findings showed that protein fibres with different forms can be assembled by different packing of a common structural building block. This explains one of the major conundrums in amyloid research which is how so many different forms of fibre can come from the same protein sample.

“It’s the equivalent of going from trying to make two balloons stick together to having two cogs rotating perfectly with each other.”

Professor Radford said: “Over the past six decades since the first electron microscopy pictures of amyloid were created, scientists have progressed from working with blurred low-resolution images to our razor sharp 3D images and structures, thanks to modern advances in cryo-electron microscopy.

“Now we know exactly where each kink and point is on the protein, we may be able to develop compounds which lock tightly to it, or disrupt it, and find out how the fibres contribute to disease. It’s the equivalent of going from trying to make two balloons stick together to having two cogs rotating perfectly with each other."

She added: “We’ve used cryo-electron microscopy not only to uncover the shape and structure of amyloid proteins, but also how they grow and intertwine with each other like the strands in a rope to form larger assemblies. This knowledge is going to be crucial for knowing how to deal with them.”

The 3.3 Å structure of a plant geminivirus using cryo-EM

Professor Ranson said: “Until a year or so ago, scientists knew the structure looked more or less like a ladder, but we have now shown it is much more complex than that. We’re now beginning to see how different proteins folded up into different shapes and how those vary with every disease they cause.

“Until a year or so ago, scientists knew the structure looked more or less like a ladder, but we have shown it is much more complex. The extra detail we have uncovered means we can start to understand these proteins’ disease-causing abilities.”

“The extra detail we have uncovered means we can start to understand these proteins’ disease-causing abilities, but it is important to remember that amyloid can also be useful and helpful, for example in protecting the eggs of insects and in storing human hormones. So the structures are not always bad for you. A key question is therefore to understand how disease-causing fibres compare with their helpful counterparts.

He added “Amyloid fibres are also known to have the strength of steel, and, now we understand their structures, we might be able to make new biomaterials inspired by their structures. This is a great example of where cryo-electron microscopy can have added advantages.”

Knowing the structure of the protein in the level of detail the Leeds researchers have provided, and measuring those differences in different types of amyloid disease and different patients, could also allow doctors to show who would be most at risk, meaning treatment can be targeted to those who need it most.

The next step for the science community is to begin identifying and developing inhibitors - compounds which can control protein assembly into amyloid. Professor Radford has secured almost £2million from Wellcome to carry out this stage of development.

Further lab trials, clinical trials, regulatory approval and the involvement of a drug developer would still be required before drugs could be brought to market, but the significant steps forward in image clarity and understanding of the amyloid folding structure mark a major leap forward.

The full research paper The structure of a β2microglobulin fibril suggests a molecular basis for its amyloid polymorphism is published in Nature Communications.

The research was funded by the European Research Council and Wellcome.