Recent research by the YSRCCYP includes;

Respiratory diseases are a major cause of late morbidity and mortality amongst childhood cancer survivors. This population-based study provides comprehensive analysis of hospitalisations for respiratory conditions, the associated risks of admission by earlier cancer treatment and trends in readmissions and subsequent mortality in long-term survivors of cancers diagnosed under 30 years. The risk of hospitalisation was significantly higher in cancer survivors compared to the general population. Treatment with chemotherapy with known lung toxicity was associated with an increased risk of admissions for all respiratory disease especially pneumonia. Subsequent mortality was highest in those admitted for pneumonia compared to other respiratory conditions.

Statistical “cure models” provide additional metrics useful to identify and describe trends in survival. Additional measures include the proportion cured which is a summary of the long term survival and the median survival of the uncured which give information on those who are not long-term survivors. In this study we used a statistical cure model to explore trends in long-term survival and relapse for childhood acute lymphoblastic leukaemia (ALL) over time and by clinical characteristics. The proportion of patients cured, defined either by overall survival or relapse free survival, has increased over time while there was slight decrease in the median survival time of the uncured. We also observed a significant reduction in the risk of relapse over time.

In this study we compared cancer incidence trends using different methods for assigning ethnic groups to individuals: 1 – using ethnic group recorded in hospital medical records, 2 – using a naming software program to assign an ethnic group based on the ethnic origins of the individuals and 3 – using a combination of both processes. We found that using different methods of assigning ethnicity can result in different estimates of ethnic variation in cancer incidence. Combining ethnicity from multiple sources results in a more complete estimate of ethnicity than the use of one single source.

Level of treatment at PTC by diagnostic group and age group, Yorkshire 1998–2009 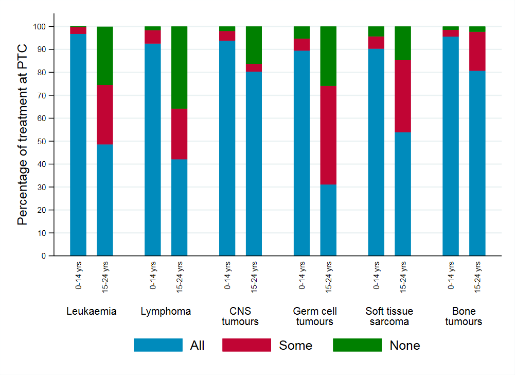 Population mixing and incidence of cancers in adolescents and young adults between 1990 and 2013 in Yorkshire, UK

This study investigated the associations between infection transmission using the population mixing proxy and incidence of cancers in 15-24 year olds in Yorkshire. No significant associations between population mixing and cancer incidence were found for leukaemias, lymphomas, central nervous system tumours or germ cell tumours. This effect did not differ between urban and rural areas.

Incidence and survival of children and young people with central nervous system embryonal tumours in the North of England, 1990 – 2013

This study described the incidence and survival from CNS embryonal tumours, specifically medulloblastoma and primitive neuroectodermal tumours (CNS PNET), for children (0-14 years) and teenagers and young adults (15-24 years) in the North of England. Between 1990 and 2013 the incidence of medulloblastoma decreased over time, most likely due to improvements in molecular testing and classification of tumours over time. The risk of death was 2.4 times higher for patients with CNS PNET compared to medulloblastoma (Hazard ratio = 2.4 (95% Confidence Interval 1.6-3.7) and the risk of death decreased by 39% for patients diagnosed since 2000 compared to those diagnosed in the 1990s (HR=0.61 (95%CI 0.43, 0.87). Although the initial prognosis was worse for CNS PNET compared to medulloblastoma, for those who survived 3 years from diagnosis, survival probabilities for the next five years were similar in both groups (85% for medulloblastoma and CNS PNET)

Amongst those diagnosed with cancer under the age of 30 in Yorkshire since 1990, 3.6% of individuals had at least one cardiovascular related hospital admission 5-years or more beyond diagnosis. Compared to the general age and sex matched population in Yorkshire, cardiovascular hospitalisations for children surviving a cancer diagnosed under the age of 15 were 3-fold higher overall. For young adults surviving cancer diagnosed between 15 and 29 years of age, increased rates of cardiovascular hospitalisations were limited to ‘pericardial disease’, ‘cardiomyopathy and heart failure’, ‘pulmonary heart disease’, ‘hypertension’ and ‘conduction disorders’. 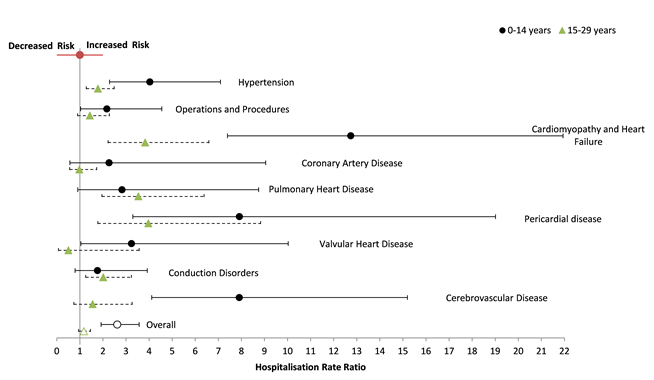